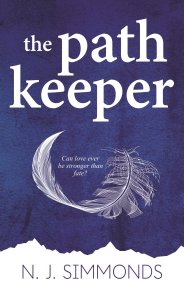 The Path Keeper by N.J. Simmonds is a thrilling story of love and loss, driven by a greater force that brings people together as the world simultaneously tears them apart. Simmonds writing flows like poetry, each sentence meticulously crafted. Although the piece is artful as a whole, there’s an underlying tension to it that cannot be ignored and builds throughout the book until the very end. There are some minor flaws throughout the book, but these are far outshone by other impressive aspects.

The story follows Ella, a young girl with a troubled past that stumbles into a relationship she didn’t know she was looking for. She finds herself falling head-over-heels for Zac, a mysterious boy with a back-story just as complicated as her own. Contrary to the fact that Zac claims they cannot be together, it’s near impossible for them to stay apart. This causes a ripple effect with consequences more far-reaching than anything Ella can ever imagine.

The dynamic between Zac and Ella is delicate, yet threaded with heartache. There’s a desperation to their actions and their desires which speaks of both their love for each other and the pain they’ve both suffered. As more is revealed of Zac’s origin, it becomes clear how deep their bond truly runs. Simmonds presents love as a driving force of nature, something that binds us together rather than an emotion that is discovered over time. It’s an interesting concept that adds another layer of intrigue to Zac and Ella’s relationship. There’s also an interesting sub-plot that, at first, seems to be unrelated to the contemporary couple, but its connection to the rest of the plot is slowly made clear to the audience.

There were some moments where the pacing of the story seemed off. Flash-backs and long, drawn-out letters had a tendency to slow the plot down and diminish the building excitement. Once those scenes had ended, though, the story picked up again and continued along smoothly. Aside from those few points where the pacing stalled, the rest of the book flowed well and without much discord.

Additionally, there were several characters that weren’t as well-developed as some of the leads were. Some of Ella’s friends specifically were one-dimensional and weren’t given much of a distinct voice. This may very well have been an artistic choice, but they really stood out amid other characters that were given complex and authentic back-stories.

Overall, N.J. Simmonds The Path Keeper is an intriguing beginning to the Path Keeper series, which holds the potential to become a solid edition to the YA fantasy genre.

One thought on “Bookworm Reviews: The Path Keeper”